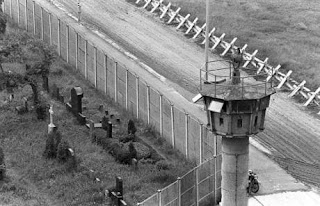 The decision by the 45th President of the USA to build a wall is not a new idea. He follows in the footsteps of Communist East Germany (German Democratic Republic) which built a wall around Berlin, starting on August 13, 1961, to prevent its citizens from escaping to freedom in the West. That wall lasted for just over 28 years until November 9, 1989, when the country that had built it collapsed along with its wall! The Berlin wall was the symbol of the cold war. What will the symbol of the US President’s new wall be?

Before the Berlin wall was built, the  Soviets launched a blockade of West Berlin in 1948 in the hope of starving out West Berlin. The blockade failed in 1949, thanks to Berlin’s American friends and allies, after they had flown 2.3 million tons of food, fuel and other goods into West Berlin!

The flood of East German freedom seekers was enormous: 19,000 in June 1961, 30,000 in July, at the beginning of August 16,000, and on August 12 another 2,400! The relentless outflow of East Germans into the West prompted Soviet Premier Nikita Khrushchev on the night of August 12, 1961 to permit the East German Government to seal off their borders for good!

After the Berlin wall had been built, US President John F. Kennedy, greeted West Berliners in a speech on June 26, 1963, only a few months before his assassination on November 22, 1963, with the words ich bin ein Berliner (I am a Berliner)! Will history eventually compare US Presidents in terms of the walls with which they were engaged?

At this point it is not yet known what the wall between the USA and Mexico will look like. One wonders whether its designers will look at the characteristics of the Berlin wall, as described by one writer:

A 12-foot-tall, 4-foot-wide mass of reinforced concrete was topped with an enormous pipe that made climbing over nearly impossible. Behind the wall on the East German side was a so-called “Death Strip”: a gauntlet of soft sand (to show footprints), floodlights, vicious dogs, trip-wire machine guns and patrolling soldiers with orders to shoot escapees on sight.


Michael Müller, the Mayor of Berlin, told Mr. Trump “don’t build that wall”: “We Berliners know best how much suffering the division of an entire continent, cemented by barbed wire and wall, has caused.” (Source: Independent)


What was the legacy of the Berlin wall? Freedom for at least 5,000 who managed to escape and death for 171 people who were known to have been killed trying to escape!

What will the legacy of the US/Mexican wall be?

Gunter Rochow
I am a Credentialed Evaluator (Canadian Evaluation Society) and founded Capra International Inc. (www.capra.net) in 1987, serving as its President until October 2016. The work with Capra involved me in increasingly intense Canadian and international consulting with a focus on evaluation, with a reach of 196 countries globally.